Chile’s gems on a string – from north to south

Getting to know the country's natural wonders

The 10 most beautiful national parks

With the exception of the tropics, Chile brings together all the climatic zones of the world over its approximately 4,300km length: from desert to high mountains, Mediterranean-like valleys, dense primeval forests to tundra-like steppes and icy glaciers, everything is there, including almost 3000 volcanoes and a seemingly endless coastline with secluded bays and either wild cliffs or quiet beaches.

Chile's rich and partly endemic flora and fauna are protected in 42 national parks and dozens of nature reserves and made accessible to tourists. They are all beautiful, but of course we have favorites… here we present the 10 must see national parks of Chile. No matter where in Chile you are doing a Spanish course, a working holiday, farm stay or volunteer work - at least one of them is guaranteed to be in your area.

All national parks have fixed admission times to ensure that you can do the day hikes and get out before dark.

Lauca National Park
Chile's northernmost national park begins about 140 km east of Arica on the Altiplano and stretches from there to the Bolivian border. The park is easily accessible by car from Arica. Altiplano means “high plain”, and that is to be taken literally here, because in the Lauca National Park heights of almost 4,500 meters are reached – and by that we don't mean climbing a mountain! It rarely rains here, and because of the high altitude it is very cold, so only a few plants can survive. The Lauca National Park enchants with its unique play of colors between deep blue highland lakes such as Lago Chungará, yellow highland grass, the black rock and eternally white glacier caps of the Parinacota volcano and dots of pink flamingos on the lagoons, all against a bright blue sky. 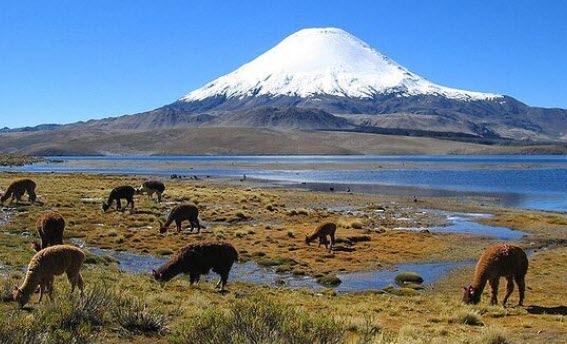 Surprisingly, there is a lot going on up there, because apart from the flamingos there are also armadillos, vicuñas, alpacas, chinchillas, foxes, wild ducks and other survivalists who enjoy their peace and quiet in the inhospitable area. Speaking of tranquility: What particularly fascinates us here is the almost complete, sublime silence. You can visit Lauca National Park in a very long day trip from Arica. However, we do not recommend this because of the extremely large difference in elevation between Arica and the park. Better take a few days for the quiet splendor, stay overnight and acclimatize in the highland village of Putre.

Reserve National Los Flamencos
This is not a national park, but the area is so incredibly beautiful that we just count it in. The nature reserve "Los Flamencos" actually includes all the highlights of the Atacama Desert - the driest desert in the world.
Something white crunches under your shoes in the Salar de Atacama: No, not snow, but salt! The eponymous "Salar de Atcama" is an approximately 3000 km² large salt lake with a thick layer of snow-white salt crystals on the surface. Three species of flamingo live here, feeding on the algae in the salar. They look beautiful when they're standing on the salt, but when they take off and streak pink across the sky, they're stunning! Nearby are the highland lagoons Miscanti and Miñiques with two almost 6000m high volcanoes in the background. Here the magic of colors is similar to that in Lauca National Park, except that the white is from salt instead of ice. In another corner of the nature reserve is another must-see: the Valle de la Luna (Moon Valley), so called because you might think you are standing in a lunar landscape, with all the rugged salt and rock formations with volcanoes in the background. 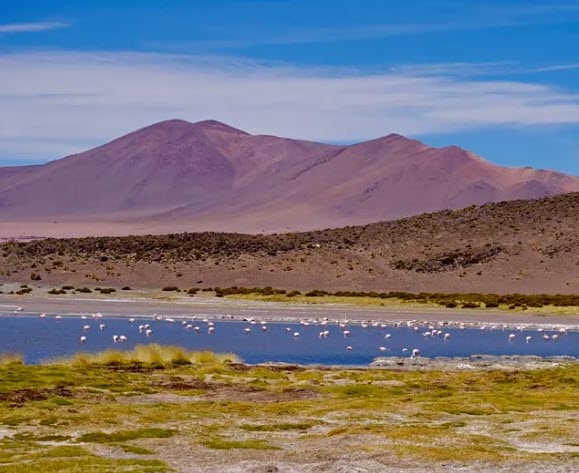 Between the natural highlights there are always picturesque small highland villages with adobe houses and cactus wood structures. A visit to this bizarrely beautiful area is worthwhile for at least three, preferably five days. San Pedro de Atacama is THE starting point for a trip to the Atacama Desert, easily accessible by bus from Calama. Here you will find accommodation for every budget, from campsites to 5* resorts. While you're there: Don't forget to take a night walk: Due to the extreme drought, nowhere else in the world are the skies as clear and the atmospheric transparency as good as in the Atacama.

La Campana National Park
Charles Darwin scrambled around here in search of unknown species. The La Campana National Park is part of the UNESCO Biosphere Reserve and owes its name to the 1910m high mountain "La Campana" (the bell). It is about 100 km northwest of Santiago and about 50 km east of Valparaíso. From there it is also easily accessible by public bus and taxi.
The 8,000-hectare national park is a reserve for the endangered Chilean palm, one of the few places where it still grows naturally. Here you can go on relaxed hikes through the Mediterranean landscape - or climb the summit of the Campana. Anyone who manages to do this will be rewarded with a spectacular view of the surrounding area: if the weather allows for it, in the west you can see the Pacific Ocean, in the east the snow-capped Andes tower up. 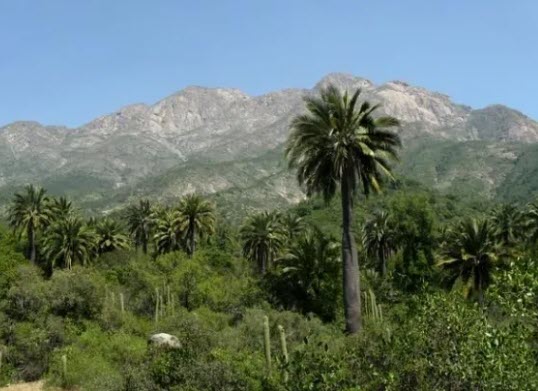 Below is a green valley in which large birds are circling – where else can you see eagles & co from above? The climb is tough, but the views and a picnic lunch at the top make it worth the effort. It is best to visit La Campana in spring or autumn, when nature is at its most beautiful and it is not too hot.

Parque Nacional Radal Siete Tazas
About 260 km south of Santiago or 90 km east of the town of Talca lies a beautiful, green-blue pearl in the foothills of the Andes. The park takes its name “Seven Cups” from a spot in the Rio Claro where seven small rock pools have formed one below the other and the river flows from one to the other over beautiful waterfalls. They are wonderfully turquoise and surrounded by jungle. The journey is worthwhile just for this view, but the park offers much more: winding hiking trails stretch over wooded ridges from which you have spectacular views. As a reward, you then hike along the deep blue Rio Claro, which forms natural pools between the rocks in many places, where you can take a refreshing bath - including chilling on white river beaches in the countryside. In several places, lagoons with rushing waterfalls also invite you to swim or admire. 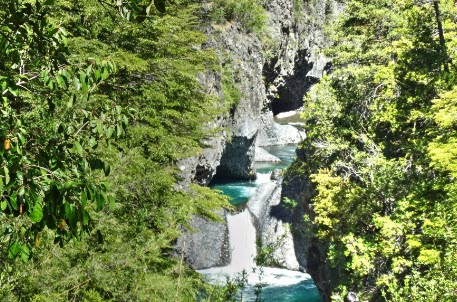 Our tip: take your tent with you and stay at one of the park's own campsites for a weekend and let your soul dangle! You can also rent a holiday home near the park.

National Conguillio Park
The Conguillio National Park is located about 80 km east of Temuco, in the middle of the Araucanía region. The region owes its name to the araucaria that grow there in the untouched nature. These primeval-looking trees have survived almost unchanged for millions of years. The mighty, active Llaima Volcano towers over the park and makes for wonderful postcard panoramas. You can hike over huge lava fields from past eruptions in this park. Many small and larger lakes and lagoons in the midst of deep green, cold primeval forests offer a fairytale contrast. 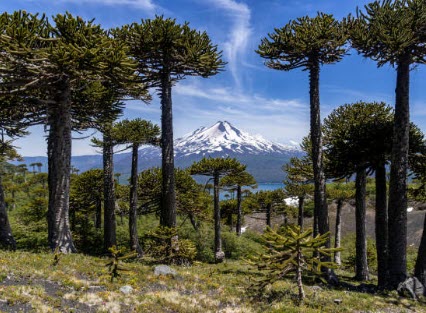 The landscape, flora and fauna of the Conguillio National Park is unique in the world and looks like a dinosaur is just around the corner!

Vicente Perez Rosales National Park
This is the oldest national park in Chile. It is located east of Puerto Varas on Lake Llanquihue in southern Chile and offers pure idyll: the Rio Petrohue meanders for kilometers through untouched cold rainforest, which is only accessible via a few hiking trails. The highlight here are the wild rapids and waterfalls of the “Saltos de Petrohue”, which visitors can admire from different angles from view platforms. The water jumps impressively over the lava rock of the Osorno volcano, which towers over the whole panorama. It is particularly beautiful there in spring when the snow melts: Then there is a lot of water and the volcano is still picturesquely white far down. 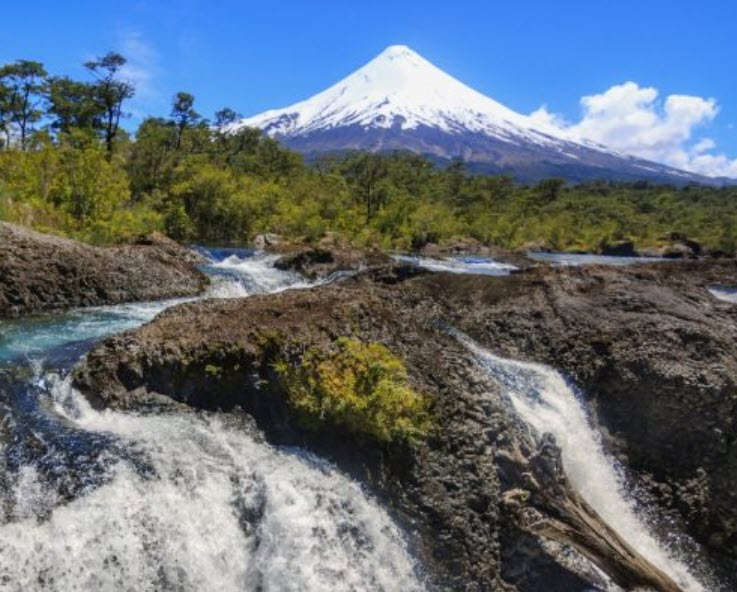 If you are adventurous and are on site in summer, you can also admire the whole thing from the water: on a rafting tour on the river below the Saltos.

Alerce Andino National Park
This fairytale forest is located at the beginning of the Carretera Austral and offers a landscape like from a "Lord of the Rings" film, only the elves are missing. It is located on the Carretera Austral about 40 km southeast of Puerto Montt. Narrow hiking trails lead through dense jungle, interrupted by waterfalls, mountain lakes and lagoons. The trees here are covered with many epiphytes, which gives the forest its fairytale character. The highlight are the eponymous Alerce trees, which grow dead straight into the sky and can become extremely old. Pumas and Monitos del Monte live in the inaccessible part of the Park; Kingfishers, Magellanic woodpeckers, chucaos, lizards and other animals can occasionally be seen – or heard – along the hiking trails. 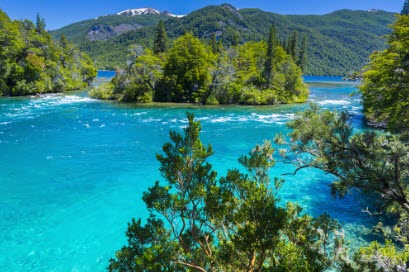 The most beautiful hike in the park takes you from the Lenca entrance to the "Laguna Triangulo". For the ascent and descent you need a whole day of sticks and stones, but the view of the lagoon, which lies almost perfectly in a rock basin, on whose walls millennia-old Alerce trees grow, is unique.

Queulat National Park
The 150,000 hectare Queulat National Park lies in one of the most pristine landscapes in Chile, far down the legendary Carretera Austral. In fact, this national park is still largely unexplored and accessible to humans only via the Carretera Austral, which crosses it for 40 km. The next big city is several hours flight away which makes this endless, evergreen cold rain forests even more adventurous. 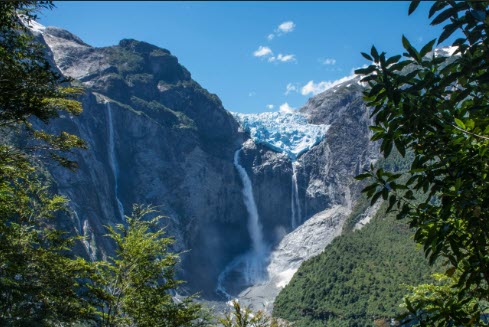 The highlight here is the “Ventisquero Colgante”, a hanging glacier that flows down from the mountains and ends about 200m above a valley where it “hangs” and lets a spectacular waterfall rush into the valley. The best way to explore Queulat National Park is to take a 1-2 week road trip along the southern Carretera Austral.

Laguna San Rafael National Park
Again, the star is a glacier, the San Rafael Glacier, which slides into the San Rafael Lagoon from the northern ice field. The water of the sea lagoon shimmers turquoise and is dotted with white and light blue icebergs. The glacier's ice wall towers some 70 meters above visitors, who cruise the lagoon in small Zodiacs. This special jewel is really extremely remote and can only be reached by boat excursion from Puerto Chacabuco or Bahía Exploradores from September to April - unless you are brave and sporty enough for a kayak expedition. 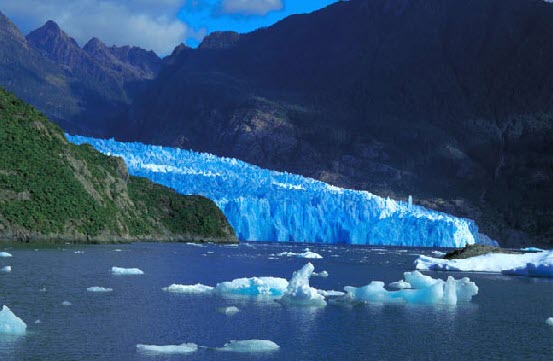 Torres del Paine National Park
This park with its 2400 square kilometers is probably THE postcard motif of Chile and despite its very remote location (or maybe because of it?) it attracts visitors from all over the world: It is located in southern Patagonia, approx. 140 km north of the small town of Puerto Natales. The flat pampas and surrounding lagoons are home to Ñandus, guanacos, condors, flamingos and other birds, as well as pumas. Here ends the "Southern Ice Field", the third largest inland ice sheet in the world, whose mighty glaciers reach into the park and have formed its many lakes. Torres del Paine National Park is a wild fairytale landscape of ice, rock and water sculpted by the wind. Here you can experience all four seasons in a single day. Landmarks are the “Torres” themselves, three granite peaks rising steeply into the sky, which are between 2650 and 2800m high. A day hike to the Torres peaks is a very athletic feat. If you really want to enjoy the park and also hike the “Cuernos del Paine”, the park’s other postcard motif, or marvel at the Gray Glacier, you should plan at least 3, better 5 days and bring sturdy shoes: There are a lot of viewpoints that are connected to the accessible by car, but the real highlights can only be reached on foot. 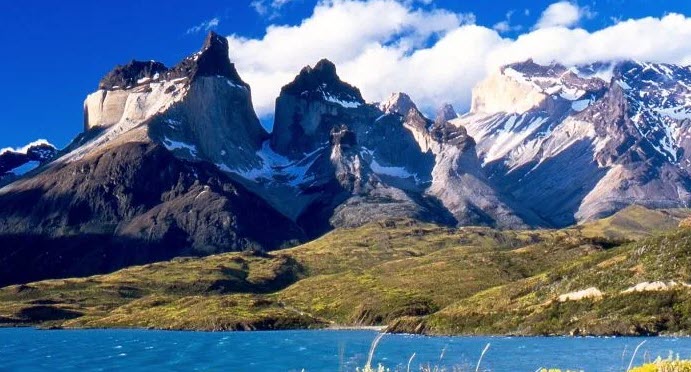